The Association des recycleurs de pièces d’autos et de camions (ARPAC), the only auto parts recycling association in Quebec, sought to quantify the presumed environmental and socioeconomic benefits of using recycled car parts. In order to do so, the ARPAC called upon Quantis and Groupe AGÉCO to use LCA methodology to compare the environmental impacts and socioeconomic performances of three possible options for the replacement of an auto part at the end of its useful life:

In order to carry out the mandate, Quantis and Groupe AGÉCO evaluated three part categories:

In order to adequately represent the environmental impacts of the three options available to a consumer in need of a spare part, it was necessary to define the function fulfilled by the studied parts. For this study, the function is therefore:

To provide replacement parts that will extend the lifespan of a vehicle in Quebec in need of repair to ensure it reaches 300 000 km.

In order to ensure the equivalence of the studied parts that carry out the function, certain assumptions were set out:

The environmental impacts were evaluated according to five environmental damage categories: climate change, human health, ecosystem quality, resources and water withdrawal. This study complies with the ISO 14 040 and 14 044 standards as well as the UNEP/SETAC guidelines for social life cycle assessment.

The main results of the environmental segment of this study are presented for the engine in Figure 1-1. The other evaluated part categories present a similar profile. 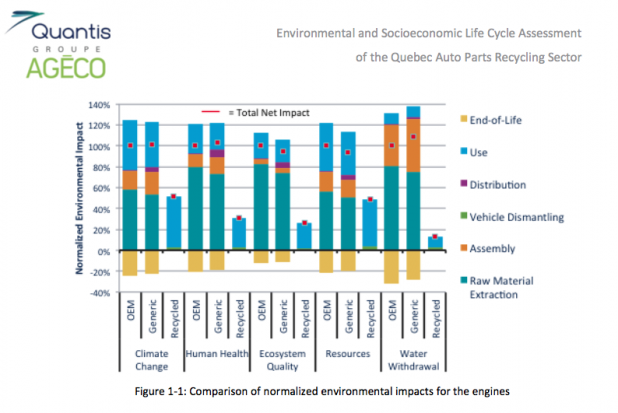 This study concluded that the recycling of parts in Quebec is beneficial from an environmental and socioeconomic point of view for several reasons. In fact, by choosing recycled parts, consumers avoid the environmental impacts associated with the production of new similar parts. The impact of dismantling parts from an end-of-life vehicle can be regarded as essentially negligible as compared to the impact of new parts production.

In addition, the environmental benefits of parts recycling can be appreciated from a different perspective. A second life for new parts stretches the impact of their production over a longer period of time by extending the life of the parts that are still usable after the end of the useful life of the vehicle in which they were initially installed.

The majority of the parts’ environmental life cycle impacts stem from gasoline combustion in vehicles. However, since the efficiency of the driving (i.e. engine) and mobile (i.e. transmission) parts is similar between the scenarios, this life cycle-stage alone is not sufficient to discriminate between the three procurement scenarios. However, for the recycled parts to generate an environmental benefit, recycled driving and moving parts must not cause excessive efficiency losses. Indeed, a total loss of efficiency of roughly 5% or an increase in friction of approximately 50% would be sufficient to render recycled parts unfavourable from an environmental perspective. In terms of passive parts such as a door, there is always a net environmental benefit to choosing a recycled part over a new part.

Installing a recycled part rather than a new OEM or generic part helps avoid the production of virgin materials and all the subsequent processes to produce a new part. This benefit was observed for all studied part categories (driving, moving and passive) and prevents, for example, the emission of approximately 1 050 kg CO2eq for an average engine, 950 kg CO2eq for a transmission and 225 kg CO2eq for a door. It should be noted that, due to the use of average generic data and assumptions based on scientific literature, the values are not accurate measurements of the actual impact reduction associated with the use of recycled parts but rather provide an order of magnitude of the expected benefits.

From a socioeconomic perspective, the analysis shows that ARPAC members are companies that have implemented many socially responsible practices. This is especially the case in terms of health and safety (workers), facilities planning (local communities), commitment to sustainable development (corporate level), business ethics with suppliers (partners and suppliers), transparency and end of life management (consumers). An organization-wide code of conduct constitutes a significant contributor since it incites members to adopt many socially responsible practices.

The economic impacts of ARPAC member activities are also quite significant: on an annual basis, they directly and indirectly contribute up to $81 million to Quebec’s GDP, generating more than 1 700 direct and indirect jobs in the sector and providing tax benefits in the order of $13 million per year for the various levels of government. Every dollar spent in Quebec to purchase recycled auto and truck parts from an ARPAC member injects $0.43 into Quebec’s economy.

Despite this good performance, there is always room for improvement. This is especially the case in terms of employee work conditions, cohabitation with the environment and consumer feedback. However, this socioeconomic assessment is a roadmap for the association and its members to improve performance over time.

The socioeconomic evaluation also highlights the risks associated with the supply of spare parts from the OEM and non-OEM generic sectors in the United States and China. It is clear from this analysis that the OEM replacement parts from the American sector are generally associated with better socioeconomic performances as compared to the generic parts made in China. Purchasing parts from China is risky, especially when considering issues pertaining to the lack of competition and transparency in the industry and lower parts quality. These are areas of concern for ARPAC members and consumers.

Knowing that, for the most part, the parts that are recycled by ARPAC members are original OEM parts from the U.S. industry, it is safe to assume that the recycled parts will yield better socioeconomic performances than the generic replacement parts made in China.

Since only the environmental segment of this study was subject to review by an external committee, the ARPAC may use this report to communicate the environmental advantages of choosing recycled parts over new OEM and generic parts to the public. As for the social segment, the results of the socioeconomic study only concern the ARPAC and its members and are not representative of the entire industry. Only non-comparative communications on the sector’s socioeconomic performance may therefore be communicated to the public.

The full report can be downloaded HERE.