BC: Impact Felt Across Industries 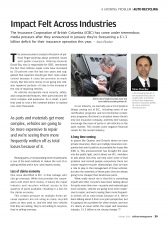 The Insurance Corporation of British Columbia (ICBC) has come under tremendous media pressure after they announced in January they’re forecasting a $1.3 billion deficit for their insurance operation this year.

The announcement created a firestorm of political finger pointing about potential issues with public insurance. Attorney-General David Eby, who is responsible for ICBC, mentioned the fact that collision repair costs have increased by 30 per cent over the last two years and suggested that repairers should get their costs under control because it’s costing the province so much money. But this extra money is not going into collision repairers’ pockets – it’s due to the increase in cost of repairing vehicles.

As vehicles incorporate more security, safety and computerized features, their parts become far more complex and expensive. As a result, a part that used to cost a few hundred dollars to replace now costs thousands.

Reusing parts, or incorporating more recycled parts, is one of the best methods to reduce the cost of repairing vehicles and in turn, save insurers money.

Loss for claims economy
One issue identified in BC, is that salvage vehicles go overseas. While this provides the corporation with short-term money, it leaves the repair industry and recyclers without access to the quantity of parts available, resulting in a loss for the claims economy.

This creates pressure on multiple fronts because repairers are not using as many recycled parts as they used to, and the total loss vehicles that they are selling, they’re not selling to recyclers, they’re selling overseas.

In our industry we normally see a lot of positive things coming out of BC, including some of our certification programs and environmental compliance programs. But here’s a situation where there’s only one insurance company and they don’t always encourage the reuse of parts or sell vehicles on the open market, creating some negative financial results for the overall industry.

A long time coming
In places like Quebec and Ontario where we have private insurance, there are multiple insurance companies that aren’t publicly accountable for losses like ICBC is. This announcement has brought the issue into the public light and it allows our BC members to talk about how they can help solve some of that problem and remind people everywhere there’s insurer-repairer-recycler relationships that we have a role to play in the management of those vehicles, but also the assembly of those parts that are always going to be cheaper than the brand new parts.

What’s really struck me is that this is something myself and other recyclers have been talking about for quite some time now – as parts and materials get more complex, vehicles are going to be more expensive to repair and we’re seeing them more frequently written off as total losses because of it. We’ve been talking about it from a recycler perspective, but it’s going to be a problem for other sectors and now it’s clearly an issue within the repair and insurance industry. $1.3 billion is not chump change.