Over the last decade, we’ve seen vehicle complexity steadily increase, driven by government mandates for better fuel efficiency as well as safety. In fact, it could be argued that today, the average passenger vehicle has so many computers and sensors, that fixing it following a collision often no longer makes economic sense.

The vehicle is written-off by the insurer and the consumer has to go and buy another one. On paper, that might seem a good thing, especially for the OEM and the franchised dealer that sells new vehicles. However for other businesses within the entire automotive ecosystem, such as aftermarket service repair centres, collision shops and automotive recyclers, it means a significant loss of business.

Put it into a greater context and you can see how it upsets the balance and harmony of the entire automotive industry.

An additional challenge today is the political and socio-economic focus on electric vehicles. While reducing emissions is a worthy goal by any measure, EVs essentially shift the pivot point for the entire automotive circular economy and at this stage, it is hard to determine what this will really mean long-term.

For recyclers, the need to understand EVs and being able to properly dismantle and recycle them, is an ongoing concern. At ARC, we’ve been hard at work developing training initiatives and working with our counterparts in the U.S. at ARA to not only establish guidelines for dismantling EVs, but what do with the battery systems, including transportation and reuse, including energy storage.

Recently, I was part of a webinar hosted by the National Alliance for Advanced Transportation Batteries (NAATBatt) a U.S.-based R&D consortium that was created in 2007 to promote the manufacturing of advanced batteries (including lithium-ion). 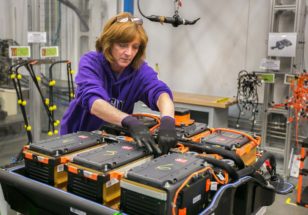 Currently, there is a huge explosion of interest in battery manufacturing, use and storage, with all kinds of startups vying for the attention of vehicle OEMs and utility companies. There’s also the big question of new versus used batteries and of course, the role that recycling plays in that.

When it comes to recycling advanced batteries, at present the process is expensive, costing around $1000 above the materials that can be recovered from them. As a result, it simply isn’t economically feasible to do it without external funding, plus with the amount of new batteries being manufactured and the need for raw materials such as cobalt to produce them, there is still a great deal of uncertainty regarding the future and viability of both these products and the techniques required to both manufacture and recycle them.

Political instability in the Democratic Republic of Congo (DRC) where currently, 60 percent of the world’s cobalt supply is sourced, remains an ongoing problem, yet despite this and a tipping point over cobalt supply and demand that is predicted to be just three years away, there remains a good deal of momentum behind advanced battery technology.

In order for this momentum to succeed however, it will require government support and funding, as well as a great deal of collaboration between not only the businesses that have staked their claims in this space, but also the nations that see advanced battery technology as a viable solution for future transportation requirements.

Change is coming and while it might be more gradual than some analysts and BEV enthusiasts initially predicted, we are going to need to be prepared for it.

At the recycling level, the expected growth in electric vehicle demand will mean more attention needs to be paid in not only how to dismantle these vehicles effectively but what will actually happen to the batteries, especially considering if a vehicle last 360,000 km and the battery was designed to last 1.5 million km or more. Under these kinds of scenarios, are we going to see bidding wars for putting those batteries back into other vehicles or, as some predict, 80 percent of these batteries used for energy storage? These are just some of the aspects that need to be considered.

Getting back to NATTbatt, while discussions have brought a number of key topics to the fold, there has been a strong emphasis on doing this from a U.S.-only perspective, given that many of the startups involved are U.S.-based. In order to succeed however, we need to look beyond individual borders and view this as both a North America and worldwide initiative.