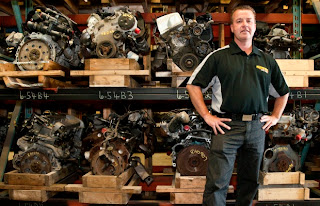 While other kids aspired to become athletes or rock stars, Denis Desjardins fulfilled his dream to recycle car parts.

In the pre-dawn hours of a recent morning, the RCMP counter-terrorism unit descended upon the yard of wrecked cars at Sonshine Auto Parts in Cumberland. Snipers came from all directions, across farmers’ fields on Innes, Dunning and French Hill roads, hoping their intervention in a kidnapping would end successfully. They brought with them a small remote-controlled drone, and weaponry capable of inflicting considerable damage from great distances. Shots were fired.

Any neighbours whose sleep was disturbed by the commotion that morning might have looked at their bedside clock, gathered their bearings and returned to sleep. After all, they’d seen this before.

The RCMP conducts training exercises in Denis Desjardins’ car yard five or six times a year. Much more common are the firefighters from various regional departments, whom he lets use the lot’s junkers -there are approximately 2,500 of them in the yard at any given time -each week to simulate accidents and practise extraction techniques.

It all seems like the ideal playground for a young boy’s imagination, and in fact if you ask Desjardins what his childhood ambition was for himself, he spreads his arms to embrace the 100 acres of cars, crushers and parts, and says simply, “Exactly what you’re looking at. This is all I wanted to do.”

Denis Desjardins’ car lot is a testament to bad driving. Row after row of neatly aligned cars, trucks and SUVs -the majority of them insurance writeoffs -face south, each perched on wheel rims to provide easy access and keep them from freezing into the ground in the winter. Most are victims of rear-end collisions, the front or back staved in and bumpers crumpled. Others have been T-boned. Deployed but now deflated airbags offer the hope that passengers and drivers escaped unharmed. Shattered windshields and melted steering columns suggest others may not have been so lucky.

“Every car has a story to tell,” says Desjardins. “On a full moon, you see the yard and I’m sure there are some stories coming out of those cars.

“Hopefully there are no injuries involved, but I’m sure that from the back seat to everywhere else, there are stories to be told. It’s fascinating, it is.”

Each year, Desjardins and his staff of 40 process more than 3,000 automobiles, draining hazardous fluids, inventorying and removing parts, and eventually crushing what remains for scrap. When your mechanic or body shop tells you they’ll try to save you some money by tracking down a used alternator or fender, Sonshine -named for Desjardin’s nickname of “Sonny” -is one of the places they’ll likely look. His parts business extends to Cornwall and Brockville, to Maniwaki and Montreal.

The parts he most popularly sells are those damaged in frontand rear-end collisions: bumpers, hoods, tail lights and headlights. He’s one of those people for whom bad weather is good business.

“When you hear in a morning in the middle of February of 365 accidents in town, that’s white gold to us,” he says. “That’s white gold. This is good to us.”

Winter is their busiest season, but Desjardins notes that fair weather can also be a boon. “Say a long weekend in May, everyone’s gone camping or they want to do their flowers. Everybody’s out in full force -lots of accidents.

“And very warm weather, in July and August, cars overheat. That’s good for us, too.”

Desjardins, 47, was born and raised in Orléans. He loved cars as a youth, tinkering with antiques and hot rods when he was in high school.

After graduation, he turned down scholarship offers and started his own business -Cumberland Towing -which he eventually built into an eight-truck empire.

But he always wanted a recycling yard, and recalls that when he and his wife, Josée, were dating, they’d sometimes drive by Cumberland Auto Parts on Dunning Road, and Denis would tell her that he intended to one day buy the business. She promised to leave him if he did.

The business grew, starting with about 15 acres of cars and eventually reaching the 80 acres it currently uses.

In 2000, the Ford Motor Company, believing a cradle-to-grave program -making auto manufacturers responsible for the entire life of their products -was headed to North America from Europe, bought his business. Desjardins, who retained title to the land, managed it for them.

When Ford got out of the usedparts business two years later and sold the business to a third party, Desjardins retired to a life of golf and pickup hockey. A year later, bored with his new-found freedom, he bought a parcel of land on Herbert Drive and started again. In 2006, the original business was put up for sale and Desjardins returned to Dunning Road.

His house, located on a twoacre lot severed from the original 100, overlooks his car yard.

“You’re probably going to say I don’t have a life. This is my life.”

By Bruce Deachman The Ottawa Citizen